It’s been awhile since I felt the want or need to sit down and write. I guess that’s a good thing actually………….in away. Or maybe it’s because of lack of time due to shifts in focus. The recent release of Nate Blakeslee’s book American Wolf: A True Story of Survival and Obsession in the West seems to have reopened gaping wounds that still haven’t healed and to be honest, they most likely will not. A friend of mine posted on Facebook today suggesting that ’06 be returned home to her park, her home, to Yellowstone, and to all of us who loved her. I ‘liked’ the post and commented that no words from me were needed. Since then I’ve read the other comments that have been added to the post and some really stood out to me, some touched me and others reminded me of where we are today.

I haven’t read the book yet. Not because I don’t think it’s a great book, I wouldn’t have purchased it if that thought crossed my mind, but more because my heart can’t take it. I have video documentaries here of her and others and other books and to be honest I can’t read or watch them either. It hurts. All this hard work advocating for living beings that have feelings and emotions not unlike human’s is emotionally challenging and if you’re not careful, dangerous.

Several things came rushing to my mind reading the comments on the post but the most important one was the feeling of being overwhelmed and not seeming to make progress in the right direction. Those feelings have been weighing heavy on me the past couple years; the current issues with wild horses, grizzlies being delisted, managing of wolves being put back in the hands of irresponsible states and more. Then it occurred to me that we aren’t losing ground. We tend to focus so intently on what we want, and only that, without compromise, that we lose sight of everything else and the small victories.

One of the comments came from somebody I have a lot of respect for, it noted that originally there was great thought put into “buying” ’06 back and that after consideration it was decided it wasn’t a good idea. Not because the funds were not available (I think the wolf advocate community has proven without doubt that we can raise money) but because we are giving unethical, selfish, hateful and inconsiderate hunters and poacher’s reason to believe this would be a new source of revenue. In addition to that, I need to add, it also gives them what they want – a sense of CONTROL.

For several years now as an advocate for wolves, grizzlies and wild horses I’ve been called all sorts of horrible names and even been physically threatened and ran off the road. I’ve learned to roll with this and at times find some of it funny enough to laugh about. The best feeling however came when I decided not to sit and have senseless debates with uneducated, hateful and silly trolls and shift my energy and focus to educating those who wanted to learn more and who wanted help in living with, conserving and protecting the animals I am fighting so hard for. I’m the only one who can allow somebody else to control my emotions and if I walk away and not give them that ability, that control, then they will find somebody else to bully or attempt to control.

The past few years I have become great friends with many ethical hunters who have become a very important part of my life. I’ve always said that although I do not hunt I do believe in proper wildlife management; PZP, other forms of birth control, adoption, controlled hunts, hunting to put food on the table. I have come to value their opinions, have learned a lot from them and respect them. We have an understanding of when certain topics probably would be better discussed at later dates, they respect me and my opinions, and to be honest, I know these people would have my back at a moment’s notice because they are old school and value things like integrity, respect and honesty. We’ve had open and emotional discussions on the illegal poaching, baiting and killing of animals who are habituated to people and they all have said that what these trolls have done is given ethical and respectful hunters a horrible reputation and not something they agree with.

I have shared with them different sources to avoid depredation, how to live with the wildlife we have encroached on, the importance of carrying bear spray, what wolves and bears have done for our ecosystem and how if they would take the time to get to know and understand these animals they are not the vicious killers they’ve been led to believe. In return I have learned patience and better listening skills; you cannot change tens of years of traditions and beliefs overnight. I’ve learned more about their concerns so that I understand what they need to be done for them. I’ve learned the large difference between those with ethics and integrity compared to those who are simply unethical, uneducated and full of hate.

I have a lot to learn still but I can sit in a large town hall meeting full of ranchers, hunters and wildlife advocates and am happy to say that within a room of 50 maybe 10 are haters who have no intention of seeing how any good can come from a wolf reintroduction program and of those 10 by the time we leave we might have 4 that leave more open minded who want to learn more. This is possible because of what I have learned from my friends who are hunters and ranchers – who have taught me patience, taught me what they know, shared their concerns and given me the same respect and courtesy. These are small victories and yet massive.

Do I think that is where she belongs and should be? Yes. The fact she was called, unethically out of the park on purpose to be murdered by a selfish hater was wrong. Sadly I have yet to meet anyone like this so that I can honestly learn what “drives” them and so I can understand – I can only imagine what fuels so much hatred. But to knowingly and purposefully kill an animal that means so much to so many people, who has done nothing to harm anyone, just shows the lack of compassion, respect and integrity that this person has. Leopards don’t change their spots and if you think this person is going to suddenly change now and happily return ’06 to her home, I think you’re mistaken.

Daddy’s Girl, White Lady, ’06 and more were all loved by all of us. One may have been more special than another for different reasons, but the bottom line is they were all loved just as much. I don’t think many of these wolves if poached or unethically hunted have been returned “home.” My heart says they have never left, their remains may not be with us and in the park, but their spirits have never left and never will. I can say that for one of them, I know this to be true. For ’06, she shows us she is there on a daily basis; the small, black tenacious, lanky pup she left behind shows us that her mom did not raise and leave behind a weak and stupid daughter. Rather she left behind a daughter who is much like her mother; a fighter, survivor, leader and one who has managed to beat all odds. How many times have we thought she wouldn’t recover and yet she shows up a month or two later stronger than the last time we saw her?

When I drive through the park now, I often times have somebody that may have never visited the park before or who may not have known these wolves. As I drive through different areas I share with them where I saw Daddy’s Girl last, White Lady, 755M, Casanova and more. I tell them their stories, how they changed not only the park but the people who have met them. I share how important their lives were and why we fight as hard as we do for them now. I may never see their physical bodies again but their spirits are there helping to guide me to bring others to them.

Once again, this troll is controlling us; he has diverted our attention away from the ones who need us here with boots on the ground fighting for them the most. We might be able to bring their bodies back but at what cost? What distraction? And do we really gain anything from it? In a sad sort of way I’d rather think that ‘06’s physical body is watching that troll daily; reminding him what he did, what unethical hunting really looks like and that one day what goes around comes around. He has to live with it and if it doesn’t eat at his soul here, it will on the other side. I can hope this is true although he has already proven he has no heart.

Everyone that advocates for these animals fights and serves in a different way; none of these ways are necessarily wrong for the most part unless you overstep boundaries. Your feelings on different views and topics may be different than another’s and that’s okay. I have chosen not to spend too much time on trolls like this and giving them control. He hurt us once pretty badly, I’ve licked my wounds, I’ve learned and I’ll come back stronger and smarter – with the pack. I’ll use him as the perfect example to draw others in by sharing his lack of ethics and morals, others like him will eventually turn against him because of the negative attention he has drawn. I’ll use ’06, White Lady, Daddy’s Girl and other’s stories and lives to make more people aware of how amazing, important and special these animals are and how their lives ended due to lack of compassion, lack of education and hatred. Do I want her to be returned home? Yes. But I refuse to give this person anymore control over my emotions, my money or my time when there are wolves, bears and horses that need my attention more.

And something to think about; if you think that this troll won, think again. He murdered the most well known and loved wolf next to Romeo. His unethical actions has drawn a lot of attention; a FB page that has drawn together more advocates than ever before that has spilled over to other FB pages, her stories are known worldwide, she now has a book written about her and soon a movie will be made about her by Leonardo Dicaprio. He may have her physical body but her spirit has made the world aware of how wolves are horribly misunderstood and murdered. He may have taken her from us but he has united the pack and united we are smarter and far more powerful. 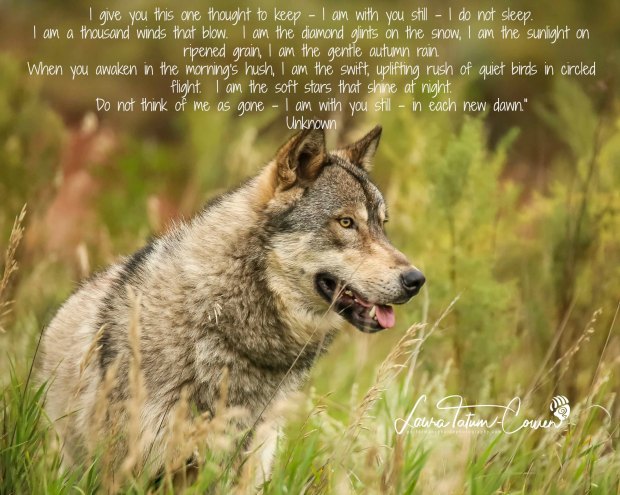 Travels with the Blonde Coyote

Follow the Blonde Coyote and see more of the world!

A US reg non-profit: securing a future for our rhinos.

Celebrating the beauty of God's creation